May was the hottest month on record, with Alaska and India struggling with unheard of heat.  http://ecowatch.com/2015/06/23/heat-waves-hit-planet/2/ May was also the wettest month ever in the United States, but California is in severe drought.

Even Pope Francis is concerned about our warming planet. The pope says for the common good of the planet we should consume less, and reduce our use of paper, plastic, and water. Also, he advocates for less use of our cars and air conditioners. http://www.startribune.com/pope-s-message-on-earth-s-fate-is-a-call-to-action-regardless-of-faith/308943131/  http://www.nytimes.com/2015/06/19/opinion/the-pope-and-climate-change.html?_r=0

I love  that the pope gives people specific ways to help our earth. A cute story follows: 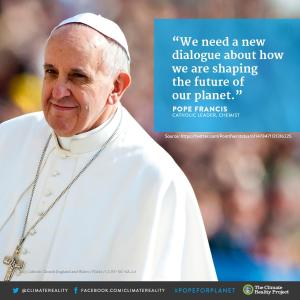 Environmental activist Wangari Maathai, of Climate Reality shares a story about a hummingbird:

“A raging fire is burning in the jungle.

It’s such an overwhelming disaster that all of the animals are watching the conflagration in shock.

A hummingbird says, “I’m going to do something about the fire.”

It flies to the nearest stream and takes a drop of water.

It races back to the fire, where it drops the water on the flames. Back and forth it goes, over and over, while the larger animals — like the elephant whose trunk could deliver so much more water — stand watching.

Eventually they ask the hummingbird, “What do you think you can do? You’re too little!”

Without pausing, the hummingbird answers: “I am doing the best I can!””

The story has a simple point.

“I may feel insignificant, but I certainly don’t want to be like the animals watching the planet goes down the drain. I will be a hummingbird. I will do the best I can.” — Wangari Maathai

http://www.upworthy.com/in-this-charming-short-story-a-hummingbird-explains-why-we-have-to-at-least-try?c=cr1  (The complete version of this story)

Don’t stand by and watch, do the best you can. What is one thing you are doing to reduce your carbon foot print? Every little bit can add up to a whole lot!