We love an underdog, and when a small town Iowa newspaper takes on the industry that dominates its state you pay attention! The Storm Lake Times has just won a Pulitzer Prize for editorials on Iowa’s water problems caused by agriculture. To me this is a story about justice and fairness.  Why should an industry be allowed to pollute, and harm the health of surrounding communities? Why has it become such an expensive struggle in farm country for communities to provide clean water for their residents? Because I live in Minnesota where agriculture has poisoned many of our lakes that are near Iowa, I have followed this story of Des Moines Water Works suing the surrounding Iowa counties.  The Storm Lake Times and Art Cullen receive all my praise and congratulations for their year of editorials on this challenging issue.

Below is one of Art Cullen’s editorials:

“The public would appear to have made up its mind about the Des Moines Water Works lawsuit against Buena Vista, Calhoun and Sac counties over nitrate pollution of the Raccoon River. The Des Moines Register’s Iowa Poll reported Sunday that 60% of those surveyed believe the water works was right to sue drainage districts in the three counties for discharging polluted water into the river.

It is virtually the same result the poll found a year ago.

Urban residents, small towners and even rural dwellers all show majority support for the water works position. This after a barrage of advertising in the Des Moines TV market sponsored by Farm Bureau, and a host of radio ads aiming to fire up rural residents against encroaching government.

Anyone can see how filthy Storm Lake is, how the Des Moines River near Humboldt is a mud flow, how shallow lakes in Northwest Iowa have eroded into duck marshes.

Anyone with eyes and a nose knows in his gut that Iowa has the dirtiest surface water in America. It is choking the waterworks and the Gulf of Mexico. It is causing oxygen deprivation in Northwest Iowa glacial lakes. It has caused us to spend millions upon millions trying to clean up Storm Lake, the victim of more than a century of explosive soil erosion.

Everyone knows it’s not the city sewer plant causing the problem. And most of us recognize that this is not just nature at work busily releasing nitrates into the water. Ninety-two percent of surface water pollution comes from row crop production — an incontroverted fact from the court case.” The entire editorial

And an excerpt from another Art Cullen editorial: “Which goes to show that nobody really knows what to do. The initial reaction to the lawsuit was to condemn the water works for interrupting our way of doing business. The second intuitive reaction was to throw a ton of money at the issue. The agri-industrial community has tried to convince us it will take $6 billion or $10 billion or $15 billion to protect Iowa’s surface water from nitrate pollution. It scares the bejeebers out of taxpayers, especially in defendant counties.” The entire essay

Read more about this story here. 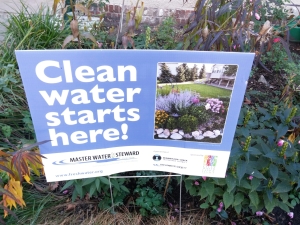 The farming community should never have been exempt from the Clean Water Act. Agri-business has become too powerful and now there is no controlling them.  The reasons why regulations are so important for the health of us all!