We now have a government that is dismantling all protections the American people have from corporate America.  Corporate profits now take priority over the health of people, wildlife and the entire planet earth. The United Nations released a report this week stating how harmful pesticides are to people and the planet.

“The chronic overuse of pesticides across the world has caused “catastrophic” harms to human health, human rights and global biodiversity, according to a report presented to the United Nations human rights council Wednesday.

The UN-solicited study on toxic chemical impacts to global food sources criticizes pesticide manufacturers’ “systematic denial” of the broad harms caused by their products and calls for a transition to healthier farming methods that move away from the current dependence on pesticides.” Read about it here. And more about it from Ecowatch.

And read about the state of our bees from pesticide use and habitat loss.

In his book, Poison Spring: The Secret History of Pollution and the EPA, published in 2014, E. G. Vallianatos, who worked for the EPA for 25 years, wrote:

“It is simply not possible to understand why the EPA behaves the way it does without appreciating the enormous power of American’s industrial farmers and their allies in the chemical pesticide industries, which currently do about $40 billion per in year business. For decades, industry lobbyists have preached the gospel of unregulated capitalism and Americans have bought it. Today, it seems the entire government is at the service of the private interests of America’s corporate class.”

We can only control our corner of the world.  I hope you will think twice before putting pesticides on your yard, and speak out against the use of chemicals in agriculture and in our parks! 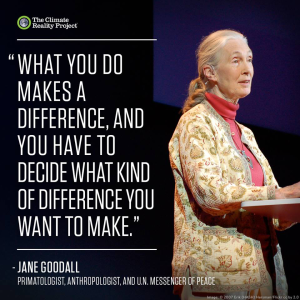 Jane Goodall: How Can We Believe It Is a Good Idea to Grow Our Food With Poisons?

2 thoughts on “Corporate Greed and Our Health”